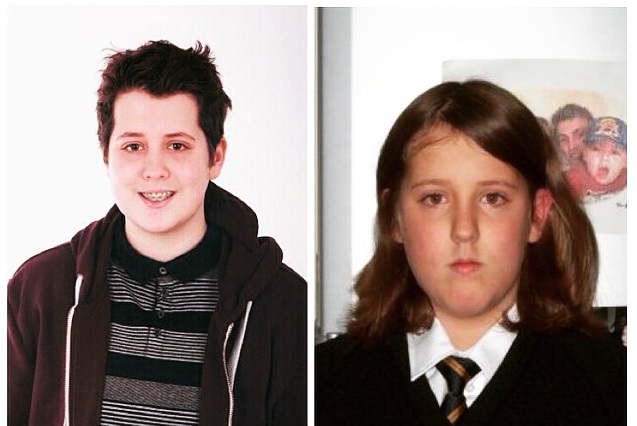 right photo – 11 years old (first day of high school): Unfortunately i remember this age so so well. it was months/weeks after i wrote my first suicide note saying i was going to kill myself, i clearly wasn’t in the correct mind frame or whats so ever, it was just after puberty kicked in and i wasn’t happy at all, i was always sad, i had no friends, my mum was divorcing my dad and i was in pieces. moving 300 miles away from the place you grew up and where you lived was hard for me. I refused to wear a bra, i refused to knowledge that i was beginning to become a female. as it didn’t feel right, i didn’t feel comfortable and i was having little dysphoria moments. At this time i was just an alone kid and I wasn’t prepared for puberty as I hadn’t been taught it before. i hated the fact that i was becoming someone who I didn’t recognise. But for the sake of my family and bullying i didn’t tell anybody how i felt, because who would believe a 11-year-old tom boy when she says ‘i feel like a boy’, nobody.

left photo – 17 years old (half way through college): At the age of 15 i turned around to my friends and told them that i was transgender, in fact it was the 20th of February 2013! i had this massive weight taken off my shoulder, after years of self harming, drug taking, smoking and suicidal thoughts i thought i may as well be open with life and that’s when my deep and darkest fear became public. That day i lost some friends because of it but my real ones have stuck by me throughout it all and are still here today. I chose the name Alex and began introducing myself to others and they started to click on pretty quick. Since that day ive been so happy and so so thankful. I remember when the teachers found out that i was trans, some of them didn’t react too well and some of them didn’t care, for example my old maths teacher Mr Baker said straight away that he’d call me Alex and use male pronouns and not once did he mess up, he was the most respectful teacher in the high school i went too. This new year i came out to EVERYBODY in my family and since that day, they’ve respected my name change and they’ve respected that i am trans and they use the correct pronouns, i never imagined my family being like this, but then again i’m still going to be the kid of the family who always ends up in trouble or who tells terrible jokes, i’m just being honest and doing and being who i am in life, because i don’t want to be sad, depressed, suicidal or i don’t want to harm myself over something that can possible be helped. i’m just over 1 year and six months clean now and i cant even express how it feels. i feel like i’m beginning to be the person god intended me to be, i understand that this is such a long and hard-working process but i wake up everyday purely because i know that one day, ill be a true son, a true brother, a true nephew, a true grandson and possible a dad and a husband (i hope!). if someone said to me 2 years ago ‘Alex, you’ll be happier, you’ll be alive and you’ll be making the most of your life, you’re in college and you’re doing some amazing things for the transgender community and you’re free and open’ i would have never believed them in a million years, because i suffered with isolation for 4 years, but now, i’m alive and i’m happy.